The latest kickstarter was successfully funded, which has allowed me to release another four miniatures for the range.

These four; Yomi, Taro no Ken, Fukashi and Shinten, have all been sculpted by master sculptor Pedro Fernandez Ramos. They are affiliated to the Exiles of the Tetsu Clan. If you are interested in getting them, head over to the "For Sale" section. :) 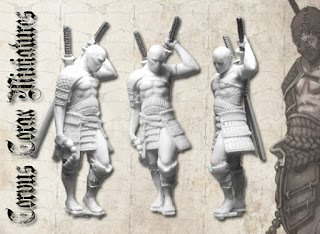 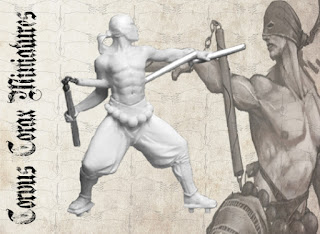 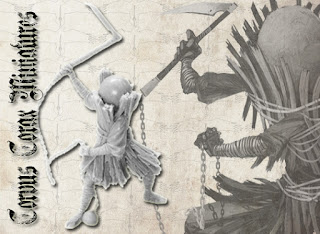 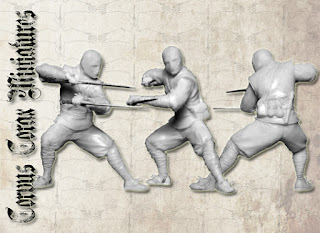 So I've got a question from one of the most loyal supporters of the project, which I figured could make for a nice new post.

"The question was why did the outcast crest change, and did Kruuz lose his governance."

It was quite surprising that someone caught onto the links of these crests. :) I didn't think anyone would notice. Anyway, the old crest, which you can see, for example, on the character card from the post from 9/11/16. The old crest of the Dur Makeb was a claw, which tighly linked the tribe to Kruuz, who is the current alpha, or leader. The new crest bears more a resemblence to Gorgr, as one can clearly see tentacles on the crest. The reason for the new crest is because new ones were needed, and created by someone more professional than myself. So the new ones are commissioned products, and look by far more professional. So, no... Kruuz will remain the alpha. At least for the time being. ;)

However, with the new design, I also decided to change the leadership structure a bit. But this change has more got to do with the game mechanics than with the background of the world itself.

If you have a look at the character cards, there are a numerous of icons. In the top left corner, there are the following symbols: a star, a pair of crossed swords, a circle with a cross, and a shield.

The star indicates that the character is a leader. And one leader must be included in every warband. As you can see, both Kruuz and Gorgr is now a leader. This allow for a little more option when mustering your force.

The pair of crossed swords indicates that the character mainly is considered a damage-dealer.

The circle with a cross indicates that the character is a support/hybrid character. While these characters will not be able to deal out too much damage, and will be quite fragile, too, they can support the rest of the characters with shielding, healing, etcetera. They could potentially play a central part of any successful battle.

Faun, for example, is the outcasts' sole support at this point. One of his abilities, "black pool", is that he will be able to dot the battlefield with small spots of black pools, through which other members could act. If one of your characters stand next to a black pool, and an enemy character on the other side of the map also stands next to a black pool, your character could make a range attack through the black pools to damage the enemy. This has proven to be in particular nasty when combo'ed with Gorgr's "tentacle grab", where it is possible for Gorgr to pull an enemy all across the far side of the map straight into the clutch of waiting outcasts.

The shield indicates that the character is a protector/defender. They are the heavies of the crew, with a much larger health pool than the rest, which allows them to soak up damage. But they aren't harmless in close combat. Oren, for example, will become more leathal the more damage he takes. Furthermore, by using several of the heavies, one will be able to control the other team. Keras got a headbutt, which will stun your opponent, as will Oren with his knockdown. If abilities are chained one after another, they would be able to pretty much take one character of consideration and allow focus on the other. Keras could, potentially, actually stun the entire team, if he successfully would manage to charge a cluster of opponents.

In the top right corner, there are several dots. These indicates how many actions a character will be able to use during one turn. 5 dots equal 5 actions. As of now, all characters got 5 actions, but this will likely change to balance the characters powers in line with each others.

Looking forward to 2017, I will hopefully be able to re-launch the Kickstarter that failed to reach the funding in late 2016.

Apart from this, I am continuing to working on the background of the world and the game itself, although it is still going quite slow. I am also still working on getting the character cards done, and while most of the basic layout is done, I will have someone to touch the layout up a bit to make it look a little more nice.

I have also had the icons of each factions reworked, and while these are not the only factions, these are the ones that will be the focus point initially. Each faction will include around 6-9 characters, to provide a little variation when designing the warband in-game. This means that the more factions I add, the harder it will become from a balancing point of view. With these current five factions, I am looking at around 30-45 characters. Honestly, this many individual characters are already now a challenge to get right, which is one reason why the development is taking time.

Anyway, here are the icons for the five factions.

From left to right:

The Clansmen of Caer Loch; The Sons of Yetl Black; The Outcasts of Dur Makeb; The Nomads of the Birch House; The Exiles of the Tetsu Clan.

This means that two factions that have been developed will be put a bit on hold. The Guardians of Raven Oak and the Militia of the Free City of Rexen. Some of the sculpts have been commissioned for these two factions, and they could potentially be made available just as miniatures until the development of the other five factions are completed. This will also mean that some of the background story will have to be readjusted. For example, the Free City has been a central part and they have been the "narrative focal point" of the background. I do realise, though, that the background is by far more important for the creator than for others, so I do not expect most people to care too much about this. :)

Anyway, if you have any thoughts about the icons, good or bad, let me know. :)
Posted by Unknown at 3:21 PM 1 comment: 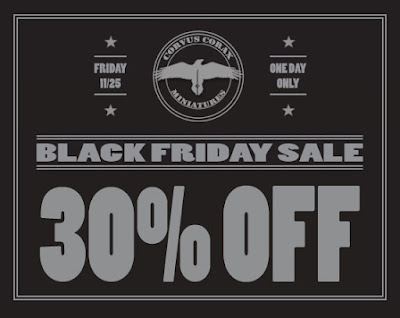 Join and support the project, and spread the word to your friends! :) 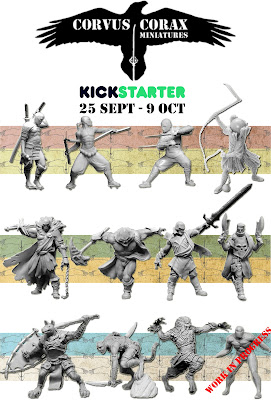 "Pagen", the latest character sculpted by Luc "Thantor" Pinganaud. He will be a part of the upcoming Kickstarter, which I hope will successfully fund. I am crossing my fingers, at least. :) 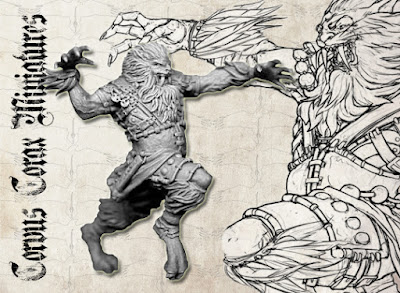 This is an early character card design. It is not a final version, and there will be changes to it, but the basic design will remain the same. I am aiming for a clean design that isn't too hard to "read" when looking at it. But you will get an idea of how the end product will look like. :) 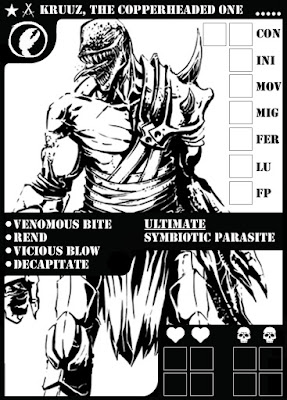 And here are another 4 sculpts that will be a part of the next Kickstarter which will launch shortly. :) No surprises here, as you have seen them earlier already. :)

Villa, Headsman of Caer Loch, sculpted by Joaquin Palacios. Villa, son of the clan's executioner, received a harsh upbringing. His mother was lost at birth, and every since Villa was blamed for her death by his father, and he constantly was reminded of this by being on the wrong end of his father's whip. Villa was appointed the clan's new headsman at the age of sixteen after his father was a casualty at the battle of Groenward. Villa, too, was a part of that particular battle, where he single-handedly defended the important landmark of the Umpire Boulder and held it for well over an hour, allowing for reinforcement to arrive. Reports have it that Villa was at their arrival covered in blood and surrounded by more than two-dozen bodies of their fallen enemies. 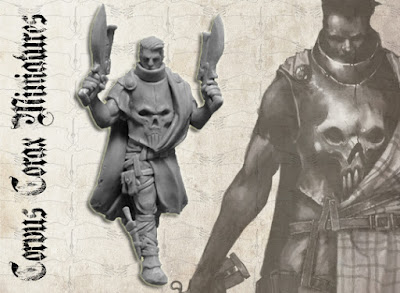 Posted by Unknown at 2:27 PM No comments:

These four figures will be a part of an upcoming Kickstarter project, which will see a launch before the end of this year. With enogh support the project could hopefully continue to expand and develop. I hope to aim at around late September or early October, but nothing is yet set in stone.

This is one faction of totally three factions that will be the funding goal for the Kickstarter. So another eight miniatures on top of these four will be included. I will hopefully be able to show another figure the coming few weeks or so, so stay tuned. :)