Some time has passed since the latest post I've made and I with this post there isn't too much new things to be shown. I did get a few copies of Gorgr from the caster a bit ago and I am very happy with the result of it. I am thinking of maybe possible launch a second Kickstarter to help me to raise some funds for casting of more copies and also to help with the progress of the entire project. As I wrote initially, not much news to post simply because of slow pace. But we will see, and nothing is decided yet. I am, however, toying with the idea of some new character concepts for some new factions of the universe. I'll get around to post an example of them eventually to give you an idea what they are about. So stay tuned if you are interested!

Meanwhile, since I did receive some pre-production samples, I've had Gorgr painted to give you an idea of how it can look with some paint on it. As I normally say; I am quite biased, but I honestly thing it looks pretty darn bad-ass! 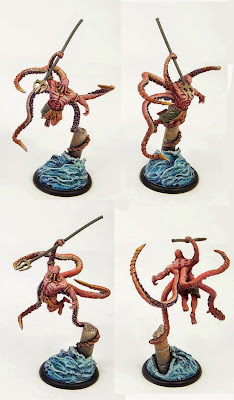