Dullahan is the first character concept done for the Clansmen of Caer Loch. 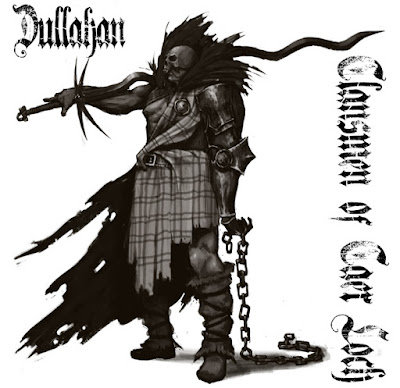 Historically, the Caer Loch has been a faction that remained neutral in most conflicts and kept mostly to themselves. At the peak of their power they defended their borders fiercely and any invader quickly learnt that they were to expect heavy casulties if they were to attempt an invasion of the Caer Loch territory. But as the years past by and other warring factions drove their conflict closer to the Caer Loch it was inevitable that they were to be targeted more frequently.

The Outcasts, who were swelling with in numbers, expanded their borders very aggressively, and consumed Caer Loch towns and cities, usually razing or sacking them to the ground. In the same time, the Nomads raided their borders as well, putting even more distress on the defenders. Slowly, the clansmen were pushed back and were forced to witness how their land was destroyed.

The aggression aimed towards Caer Loch took such heavy toll on the clansmen that the decision was finally taken to abandon all settlements they had beyond the Bastion of Caer Loch and regroup in their old lands. The Bastion became their new frontier, and any attempts to reclaim their lost land is launched from here.
Posted by Unknown at 12:11 PM