Kára, Skjaldmaer of the Birch House, sculpted by Pedro Fernandez Ramos, is the fifth member of the Nomads. In the culture of the Nomads, shieldmaidens are highly valued warriors, and are in battle commonly found in the first line of warriors. They are trained from early age to master the art of spearing and most even surpass the skills of their battle-brothers. If a shieldmaiden falls in battle, it is not uncommon that it sends the battle-brothers into a frenzy as it is believed that she will guide the fallen into the great halls of their ancestors. Kára, too, believes this, and she will fearlessly launch herself at her enemies in a furious storm of attacks. 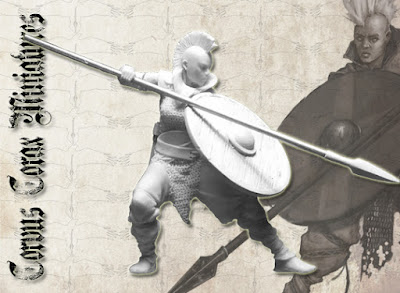