Shinten of the Tetsu Clan, sculpted by Pedro Fernandez Ramos.

In time of strife, every clan needs a coldblooded killer. For the Tetsu Clan, this is Shinten. He is the prefered assassin of the clan, having the reputation to never miss a target. He is often used to infiltrate the enemy where he has got the task to eliminate the leaders when needed. But alas, the missions issued to Shinten has taken a toll on him and has made him emotionally numb. He does not care anymore who falls by his hands, but take pleasure in ending the life of anyone who steps in front of him. One such particular unfortunate event resulted in him killing a clan member with the now slain member's own weapon. These weapons, his pair of sais, are now his prefered weapons of choice to the dismay of his own clan. 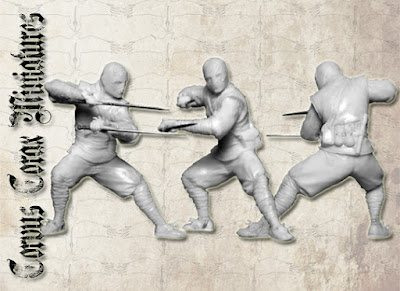